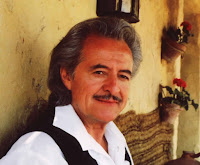 American film and TV actor Henry Darrow died March 14, 2021 at his home in Wilmington, North Carolina. He was 87. Born Enrique Tomás Delgado in New York City of Puerto Rican heritage on September 15,1933, he appeared in over 150 films and television performances. Best known as Manolito Montoya for 5 seasons on TV’s ‘The High Chaparral’ he also appeared in the Euro-western TV series ‘The New Zorro’ as Don Alejandro de la Vega for 4 seasons from 1990-1993. The series was filmed in Spain and starred Duncan Regehr.
Posted by Tom B. at 10:05 AM