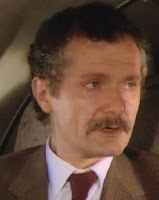 Italian actor and voice actor Natalino Libralesso also known as Stefano Carraro died in Rome, Italy on March 24, 2021. Born in Rome on November 22, 1941 he began his career as a radio speaker of the Giornale Radio Rai. but due to the exclusive contract with the radio that was signed at that time, he began to dub under the pseudonym Stefano Carraro. Among the actors he has voiced are Charles Bronson, Roy Scheider and Liam Neeson. Natalino was the Italian voice of Michel Lemoine in 1969's "Cemetery Without Crosses"; Angel Aranda in 1969's "Law of the Violence"; Vassili Karis in 1971's "He Was Called the Holy Ghost" and Paolo Resino in 1973's "Anything for a Friend".
Posted by Tom B. at 9:31 PM