Who Are Those Guys? ~ Bruno Corelli 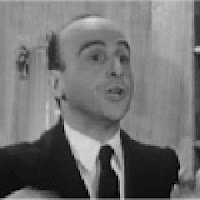 Bruno Corelli was born in Bologna, Emilia-Romagna, Italy on August 20, 1918. Bruno was part of a dramatic society of his hometown before moving to Rome to attend the CSC (Centro Sperimentale di Cinematografia). He made his film debut in 1938, when together with several of his classmates he took part to the film Giuseppe Verdi Corelli. He then abandoned his courses to take part in several stage plays, revues and to perform as a mime-dancer. After World War II he became a film actor where he usually appeared in comedy films as a supporting actor. He would go on to appear in over 40 films from 1947 to 1963.

Bruno Corelli retired in Tunis, Tunisia where he died on February 17, 1983.