Who Are Those Composers? ~ John Sol 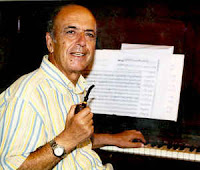 John Sol was born Josép Solá i Sànchez in Mollet del Vallès, Barcelona, Catalonia, Spain on August 18. 1930. He was a student of Suñé Joan Sintes who taught him the basics of harmony, after he had acquired a musical base at the Municipal Conservatory of Music in Barcelona, at a young age Solá left his fledgling musical training, preferring to make popular music. At a little more than twenty years of age he had his own orchestra, specializing in light music and jazz, with regular appearances at Pasapoga in Madrid and Barcelona's Farmhouse. While playing in Barcelona he received what would be his first film assignment:”Un vaso de whisky” (1958), in which he also appears as the orchestra conductor. The score was a genuine emergence of jazz as dramatic music on the Spanish soundtrack.

From that moment on, Solà's career as a musician was now Solá the film composer. However, with the balance of Spanish film production became increasingly inclined to Madrid, so that José had to face the handicap posed on him by mandatory visits to the nation's capital. Finally, his work as musical director (in Barcelona) Columbia House, and the composition of commercial jingles became more present in his work and Solà left the composition of the cinema in 1986. As John Sol he composed music for one Euro-western 1965's “Finger on the Trigger” with Rory Calhoun.