Today marks the 50th Anniversary of the premier of “The Last Traitor” which was directed by Giuseppe Vari under the pseudonym Joseph Warren and starring Donal O’Brien, Murice Poli, Dean Stratford and Maily Doria. The story is about a small village named Sonora, which borders Mexico, where a group of people are preparing to celebrate the upcoming wedding of Captain Ned Carter and Mary Belle Owens. The guests become nervous when someone notices the table has been set for 13 an unlucky number. The suspicion is confirmed shortly afterwards by the arrival of a stagecoach carrying the bodies of the bride and three other passengers. Finding the guilty parties of the crime immediately becomes a priority. The mystery is finally cleared up by two of the guests, Tim and Joe, who, investigating on their own, manage to find out that Ned is responsible for the crimes. It seems that during the time of the Civil War, he had taken possession of a large shipment of Confederate gold, which was then hidden in an abandoned mine owned by the father of Mary Bell. After the war he romances Mary Belle in order to find the hidden location of the gold. He is forced to kill the girl's father, after discovering the secret location. Shortly before the wedding, Ned had to kill his girlfriend, who, suspecting he was responsible for her father's death, had gone to the authorities and two undercover government agents who had accompanied her to the wedding. Ned will pay for his sins, succumbing to the vengeance of one of the guests at the wedding, Tim, who was sincerely in love with Mary Bell.

The 13th is a Judas – English title 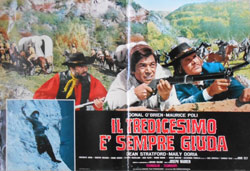