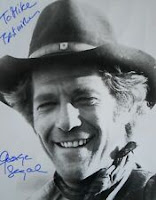 American actor and musician George Segal died March 23, 2021 in Santa Rosa, California due to complications from bypass surgery. He was age 87. "The family is devastated to announce that this morning George Segal passed away due to complications from bypass surgery," his wife Sonia Segal said in a statement. Born on February 13, 1934 in Great Neck, Long Island, New York, he discovered an interest in acting at age 9 when he saw Alan Ladd in the 1942 film noir This Gun for Hire. After appearing in a few roles on stage, including an understudy part in Broadway's The Iceman Cometh, Segal enjoyed a few minor film roles in the early 1960s. His first substantial part came in 1961 with The Young Doctors. He’s perhaps best known for his performance in Who's Afraid of Virginia Woolf?, for which he was nominated for an Academy Award for Best Supporting Actor. George appeared in one Euro-western; as Gottlieb in the 1980 TV mini-series “My Friend Winnetou”.
Posted by Tom B. at 7:37 PM