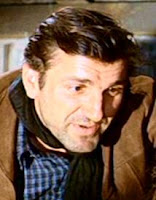 Serbian actor Velimir Bata Živojinović died in a Belgrade, Serbia hospital on May 22, from complications of gangrene. He was 82. Bata, who was born in Koracica, Serbia on June 5, 1933, had been in poor health from a stroke in 2012. Zivojinovic had twice received the Golden Arena for Best Actor at the Festival in Pula - for the films "Kozara" (1962) and "Three" (1965). For the film "Tren". In August 1993 he was awarded the Lifetime Achievement Award "Slavica" for its role in the Yugoslav film industry and recognition of the Yugoslav Film Archive - Gold Seal. He appeared as Jim Potter in 1965’s “Flaming Frontier”.
Posted by Tom B. at 7:38 AM