The meaning of (CSC) as seen in Italian film credits 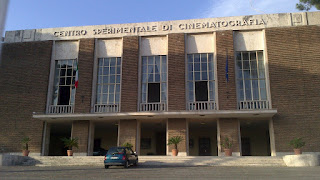 The letters CSC often appeared in the opening and closing credits of Italian films throughout the 1960s and early 1970s. The letters were attached to the names of cast members and technicians who had attended the Centro Sperimentale Di Cinematografica, the school funded by Mussolini in 1935 for the study and advancement of the art and science of making motion pictures. For years at least two people per film (whether primary or minor actors or technicians) had to have the letters CSC attached to their names in order for the film to gain state funding and tax breaks. Oddly enough, even when names of cast members and technicians were anglicized into barely recognizable pseudonyms, the letters CSC were still attached, explaining for example, why you would see Erica Bianchi Colombatto CSC and Erika Blank CSC appearing in the credits for the same film in both the original Italian language versions and then the dubbed English-language export prints. The oldest film school in Western Europe, the Centro Sperimentale Di Cinematografica is still financed by the Italian government and focuses on research, publication and theory as applied to all the cinematic arts.
Posted by Tom B. at 6:54 AM