History of the Revolver Project 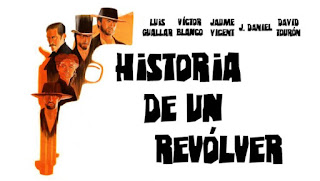 The history of a revolver is a collection of stories from the West that pays tribute to one of the best known of the genre directors.

Towards the end of his career, the Italian director had the idea to dust off his spurs and return to western. His idea was to work on a series called Colt, who narrated the vicissitudes of a revolver that changes hands, and would serve as a thread to show different lives and scenes of the American West.

His untimely death prevented this project to materialize.

Today, five authors have sought to recover this idea and make the project a reality in honor of Sergio Leone.

A revolver that changes hands each chapter

History of a revolver is a collection of stories whose common thread is the same Colt Peacemaker. We seek an entertaining style, enhancing the power of the image and strength of the dialogues, as in the best westerns.

Different authors have contributed their own vision of the genre to form a varied book, but has also been reviewed and compiled to achieve a harmonious and professional style.

For more than a year Victor Blanco has ridden dusty scenarios to find authors and styles with various personalities within the national literary scene. But we did not want it to be a closed call, so we have organized the "Story of a Revolver" competition to accommodate a sixth gunman. We need a bullet in the drum. Do you want it to be you?

Empty out your drum, Tucson! - Luis Guallar
A thrilling story, influenced by the Spaghetti Western, in which the Colt Peacemaker appears for the first time. Upon returning to his village of San Tuco (Arizona), the desperado Tucson will realize that nothing is what it seems. A new generation of criminals, those who wear expensive clothes and hit all the weight of money and the law, which has made San Tuco a living hell ... a situation to which the bandit Tucson can only give one answer: empty your drum.

Pieces - Victor White
New Mexico Territory. The sheriff of La Vega offers a great reward for a band that operates on both sides of the US border. A story about women, but also a brutally violent western involving a stagecoach, a proud daughter of the South and a mestizo bounty hunter. Scenario in which different broken characters, offspring of a nation in a shattered mood.

The Mountain Clan - Jaume Vicent
The gun will travel away to the deep and humid forests of the US border with Canada. Peacemaker known there is called Evil, Evil capitalized: a threat before which all that is humane and just to collude. And that two mature men who fought on opposite sides in the Civil War, are forced to join forces. For different reasons, but the same goal: the gruesome Mountain Clan.

Five Silver Bullets - Daniel Aragonés
It has been many years since the revolver sang for the last time. Thus, it has become a coveted heritage. It disputed two men fathered by the same seed, half-brothers but very different. They must join forces to revenge the plague that fills the streets of Jefferson. Because this is not just any revenge, but a southern revenge. It's time to dust off the legacy of the last righteous man Jefferson: Five silver bullets.

Homecoming - David Tourón
The West is living in the twilight before the advance of modern times. Michael O'Connor is a relic of the past: a gunman up in years who only wants to return to his home in Las Cruces (New Mexico). But like him, his home has changed, and a painful reversal of fate called El Coyote will pluck from him the rest he craves. He must ride fast, crossing the border into the wild world of pre-revolutionary Mexico. Only there will he find the true way back home.

Winner of the "History of a gun" - You?
Set in the Mexican Revolution, often it considered the end of the film in the West. 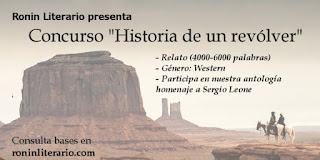 History of a gun will be in bookstores and distribution and will be released for sale in platforms online.

The main reward for becoming patron of this project is to acquire the book at an exclusive price, 14 € over 16 € but will cost more later when it is up for sale in stores. In addition, we have prepared posters and badges with the magnificent illustration of Aina Albi. Simply add the sheets you want for your reward! 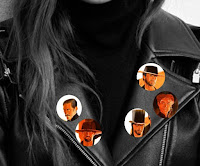 The book is closed, waiting to pick a winner for the contest, check your story with the author, and maquetarlo. History of a revolver will be released in September 2016

If we exceed the target

Budget is too tight to provide a copy in the best conditions: cover design, orthotypographical review, print, and making physical rewards.
Posted by Tom B. at 5:29 AM