Who Are Those Guys? - Gianni Brezza 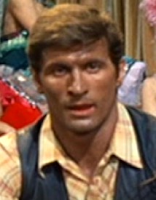 Gianni Brezza  was born in Pola, Croatia, Yugoslavia on November 9. 1942. Born in Pola, following the Istrian exodus he first moved to La Spezia and then to Rome where he began his artistic activity in the 1960s.

Brezza became a principal dancer of the RAI dance troupe, where he worked in major programs of the sixties and seventies, including Canzonissima, Studio One and Milleluci. Gianni worked, with among others, Mina, Loretta Goggi, Raffaella Carra, Sandra Mondaini, Sylvie Vartan and Lola Falana.

Subsequently, he became a choreographer and an actor sometimes billed as John Bryan, collaborating with Rita Pavone, and then a director .

After leaving the dance profession, because of health problems and increasing age, he dedicated himself to directing and cooperated in theater and television projects with Loretta Goggi, whom he married on April 26, 2008, after almost thirty years of living together.

Gianni Brezza died in Rome on April 5, 2011 for complications of a tumor.