Who Are Those Gals? - Simona Brhlíková 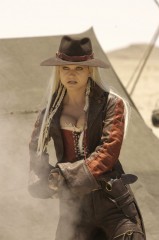 Simona Brhlíková was born in Michalovce, Czechoslovakia on September 14, 1983. The roots of her family, however, allegedly date back to Mongolia. Already in her infancy she became interested in acting, performing in several musical plays.  Simona speaks 7 languages, of which the most important is, according to her the substance of body language.

As a 17-year-old she has left her home in order to accrue as much life experience and this experience has been an adventure.  It covered a stay among the Inuit people in Alaska and the cohabitation with a strain of Masai in Kenya.  So that he could fulfill her acting ambitions she finally chose to live in London where she diligently honed her academic and dramatic skills at London's prestigious institutions - UCL and RADA.

Simona’s innate talent ultimately brought her to the drama company Rola in the performances such as “Many Shouting for Nothing” and “The Queen of Spades”. Acting on the boards, which have been followed by roles in several British television serials, of which probably the most famous is ‘The IT Crowd’ (2006).

After performing on TV Simona finally got to the big screen, and for her first film it was a James Bond movie, “Casino Royale” (2006). Subsequently, she has appeared in several films, including “Gallowwalkers” (2012) starring Wesley Snipes, in which she portrayed Kisscut. She recently finished a performance in Paige in 2016’s “Love Addict” and is working on an upcoming film called “8ish” where she appears as Maddy.