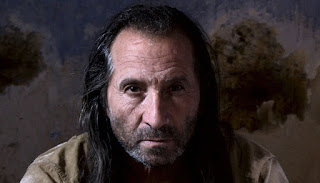 A rebel is held prisoner in the mountains at night and refuses to obey the request of his guard to leave jail after ten years of captivity. The next day the opposite occurs; the prisoner asks to be released while the guard refuses to let prisoner go, finally he gives the prisoner a hammer which he needs to break through the wall of the prison.