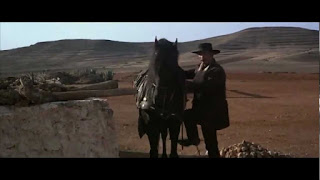 In 1959 after returning from a movie “Ride Lonesome” with Randolph Scott shot in Lone Pine, California, Lee Van Cleef was involved with a head-on car crash. The results were a broken leg and other internal injuries that put him in the hospital for a month and almost a year layoff from making films. You can see a noticeable limp in TV series and films he made in the year after Lee returned to work.

When Lee went to Spain to make “For a Few Dollars More” for Sergio Leone he still had a problem with riding as it caused him discomfort. To solve the problem they gave him a beautiful circus horse to ride and hired actor and stuntman Romano Puppo to double Lee in riding long shots.

So when you see Van Cleef riding a horse across a valley or far way ridge, most likely it’s Romano Puppo doing the riding. In close-up shots it’s Lee on a circus horse which gave him a much gentler ride.