Who Are Those Guys? - Pierre Brice 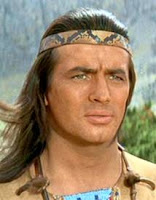 Pierre Brice was born Pierre Louis Baron le Bris in Brest, France on February 6, 1929 in Brest, France. He was a French actor who was best known for his portrayal of Winnetou in the Karl May films.

The family of Pierre Brice comes from an old French noble family.

At nineteen Brice volunteered for the Indochina War. Where his squad once triggered a land mine, it was indeed hurled through the air and hit two of his comrades, whose limbs had to be amputated, but he remained almost unharmed.

From 1962 to 1968 Brice played in eleven Karl May films at the side of American Lex Barker in the role of the Apache chief Winnetou, which made him a superstar in Germany. After more promising roles failed to materialize, he played Winnetou from 1988 to 1991 at the Karl May Festival in Bad Segeberg, where in 1999 he worked as a director. He played this role from the late 1970s until the mid-1980s at the Elsper guest performances in Ratingen and Vienna and for a short time as Winnetou on a 1982 tour.

After the box-office hits as the noble Winnetou he played in theatrical comedies and in more shallow television productions, such as in "Ein Schloss am Wörthersee" or "The Cottage By the Lake." In 1979 "My Friend Winnetou" was filmed for television and in 1997 "Winnetou Returns" for ZDF.

Pierre Brice lived with his German wife actess and photographer Hella Krekel on a country estate near Paris, France. He passed away on June 6, 2015, a hospital in Paris from the effects of pneumonia. He was then buried in Germany.