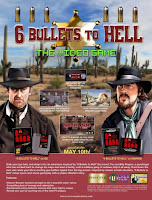 Grab your gun belt, and strap in for an adventure inspired by "6 Bullets to Hell" the movie! You are Billy Rogers, a gunslinger who has worked hard to change his ways and start a family, until a ruthless gang of outlaws strip it all away. Hunt down the men who stole your life in exciting gun battles ripped from the big screen. Inspired by classic arcade shooters, "6 Bullets to Hell" mixes touch-and-shoot gameplay with a classic Western story.

6 Bullets To Hell the film will also be released on May 10 on iTunes in conjunction with the game.