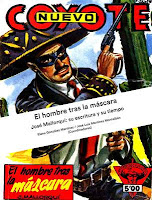 This volume collects the rigorous work that different scholars have made in their approach to the creative work of the writer José Mallorquí Figuerola (1913-1972), as well as the sociological and cultural context in which developed his professional activity, linked in essence-but not exclusively, as interiors checks on pages two leisure items characteristic of mass society of the twentieth century Spanish: the novels attached to the genre of popular literature such as the well-known collection El Coyote and scripts for radio serials, both highly successful at the time.  The interested reader will find an extensive bibliography of the author and three unpublished fragments found in his personal file, which is in the depository of the German Sanchez Ruipérez.