El Gringo was a classic cowboy character whose adventures were heavily based on the success of the Spaghetti western craze of the 1960s. El Gringo is not a superman, not even close, but he has some skill with his gun, a quality necessary for survival. The basis of the story, which was then very unusual, was current with the times and for the language and the pace of story. It was the first comic book in which the reader was transposed to the real West, with its royal costumes, tattered, graphically rendering perfectly the atmosphere hovering in that precise historical period.

El Gringo was a comic book with an Italian Western setting, created in 1965 by the author Max Bunker (Luciano Secchi) and artist Paul Piffarerio, this was their third collaboration together after Black Mask and Atomik and before Milord, Fouche and Alan Ford, after the departure of Magnus. The covers were drawn by Louis Woo. The series was edited from Editorial Corno and published on a monthly basis, the series began in October 1965 and stopped in August 1968, after 35 numbers.  Between 1977 and 1978 the series’ first 18 numbers were reprinted with new covers by Palo Piffarerio. 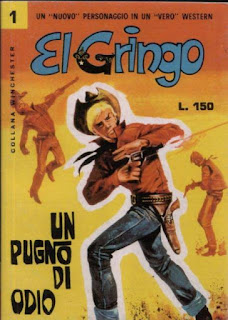 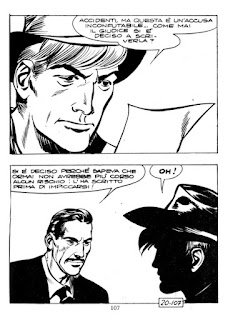 Max Bunker was a pseudonym of Luciano Secchi who was born in Milan, Italy on August 24, 1939. He is an Italian comic book writer, best known as author of Alan Ford in 1969.

His career started with a western style comic book Maschera Nera (Black Mask), in 1962. He created such successful comics such as Kriminal and Satanik in collaboration with Magnus (Roberto Raviola). Also with Magnus, the series Maxmagnus proved very successful, though arguably Bunker's most famous comics series is Alan Ford (published in May 1969), for which he wrote the scenarios, with Magnus responsible for the artwork in the first 75 issues.

Paolo Piffarerio is not one of the best-known names to the general public: he did not create any successful character, he did not give rise to magazines or publishing houses, but his work has spanned comics postwar thanks to a long career and polyhedral which begun in 1943 and was completed in the new millennium.  His drawings have accompanied comics for generations of readers, especially Alan Ford and The Newspaper, but also on many other projects that he has graced with his light touch and full of details.

Paolo was born in Milan on August 27, 1924, made his debut at just 16 years of age for the New Aurora Alberto Traini.  While still she is studying at the Academy of Brera ink pencils's Gino Gavioli created the character of Captain Falco. During the forties he worked for various publishing houses, alternating the humorous style of Larry Semon to that adventures of Albi dell'intrepido and series for the Bold Bonelli, even illustrating a series devoted to the footballer Giuseppe Meazza.

In 1953 together with the Gavioli brothers founded the film range, a production company that specializes in carousels.  While Roberto Gavioli had been producing and directing Gino realized the various characters (Cimabue, the Policeman, Dick Gregory, Trinchetto ...), Piffarerio is the technical director of most of the spots, if not the writer or director. Not in counsel to come to life on the screen, then, but his is a constant presence within the range. He takes care of photography, installation, and supervises the work for a vast production of animated short films and from daily newspapers that enter Italian homes.

His goal was to produce quality animation, even if for television, without making a bad copy of cartoons coming from the United States, especially Disney, or those of Pagot brothers.  The Gamma-style, under the guidance of Gino and Paul, is so much more concise, stylized, modern, quite similar to that of the UPA.