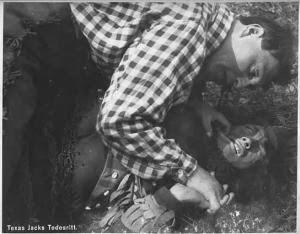 The Texas Jack film series was based very loosely on the life of Jack Burwell "Texas Jack" Omohundro, a friend of Buffalo Bill and member of Buffalo Bill´s (William F. Cody) and Wild Bill´s (James B. Hickok) Wild West Circus. Omohundro died at young age. He was only 33-years old.
Posted by Tom B. at 5:51 AM