'Almeria Collection': Crisis in the Desert 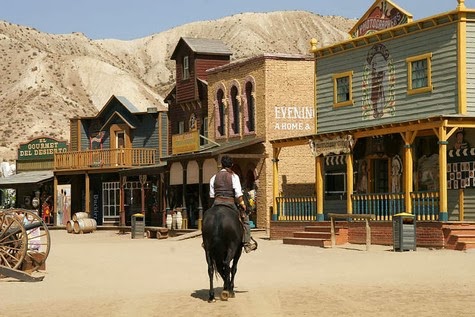 Eight stories pay homage to the Eurowestern in 'Almeria Collection'


The film co-production between Spain, France, UK and Germany, will be shot this summer

The natural landscapes of Almería and villages of the West, key elements in the construction of the collective imagination of the genre known as euro-western, are the inspiration for ' Almeria Collection', a feature film to be shot in the province during the next summer.

Subtitled 'Crisis in the Desert', the film will consist of eight separate stories directed by filmmakers from four countries, similar to titles like 'Paris, je t'aime" and "New York, I love you structure ' ( dedicated to these two cities) and '11 '09 '' 01 ' (on the terrorist attacks of September 11, 2001) .

"There are eight different stories, united by the same stage and Almeria background, but with colors and different genres: from comedy to drama, through a current and fresh to the spaghetti western look", indicated in a press release responsible the project, which they describe as "original and ambitious" and, above all, seeks to pay tribute" to the stage where he invented a new way of making films in the sixties."

The idea of ​​collective feature film, a tribute to some locations "that can be considered part of the History of Cinema and universal, especially, European film heritage," French born Jean -François Guillou, one of the producers and co-director of one of film segments. "I started to love the cinema watching spaghetti western. This way of filming, take your time, setting time and paralyzing situation is truly magical. Those movies gave us the opportunity to discover unexpected talents as Clint Eastwood. About nobodies allowed to cross the Atlantic to reach America to share artistic influences with people around the world. It was also a source of wealth for Spain and particularly Almería" he explains.

Guillou also regrets the abandonment of these scenarios when the genre went into decline in the early seventies. "From there I felt the need to refresh the landscapes so carefully filmed directors like Sergio Leone," said in a statement.

For his part, José Antonio Hergueta Malaga, MLK Producciones, notes that the filmmakers that will be behind the camera in each of the stories" rediscover those scenarios proposed, even decadence "in a movie" that celebrates the beauty" and is "a tribute to Almeria and its relationship to the film."

To choose the eight stories that make up 'Almeria Collection', producers valued "both the quality of the proposed scripts" and "originality and variety," and the fact that it is "Europe's young talent about to make the leap to film," the statement said.

Among the directors selected three Spaniards: Fabien Oliva (who directed the episode
'Collectors'), Pau Bacardit Gallego (which filmed 'The Waltz') and Daniel Martin Novel (which will do the same with 'Indians'). Rounding out the roster French Lazard Timsit ('Final Witness'), Alexis Chevalier ('Trapped in Paradise'), Jean-François and Vincent Guillou ('9 o'clock pm') and Marc Lahore ('Belle George') and the British Timothy Bricknell ('Once Upon a Time in Almeria').

'Almeria Collection' will have a budget of one million Euros and has distribution undertakings (including circuit Europa Cinemas rooms) and some European festivals, which televisions and support of European institutions will be added, some already committed.

The premiere is scheduled for January 2015.

There will be a casting call for different roles

Makers ' Almeria Collection' have opened the receipt of nominations for casting, which will take place this spring. Interpreters for the many roles which include eight stories of the film, with a variety of roles are sought.

You can consult the full list of characters that are searched on the web www.mlk - producciones.blogspot.com. Actors of all ages are needed, from babies to men and women around seventy.

Applicants should send their CV and photographs by email to proyectos@mlk.es crisesinthedesert1@gmail.com and directions.

The deadline for nominations is open until 28 February.