A TASTE OF VIOLENCE 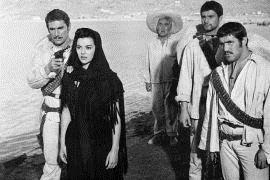 1890, in a poor country in Latin America, civil war has broken out. At the head of a revolutionary group, Perez, Chico and Chamaco, attack a train that Maria, the daughter of the head of state, is travelling on. Avoiding villages, peasants and nationalists, the three men bring Maria to the revolutionary headquarters. But misunderstandings happen: Perez wants to sacrifice everything for the revolution, Chamaco wants to request a large ransom for Maria, Chico is in love with Maria and wants to run away with her. While Chamaco tries to get rid of Perez, he fails and Chico is killed. Chamaco is killed by Perez and Maria is touched by his death. The couple stops Chez Bianca, sister of Perez. They are informed of the latest events, that the headquarters was located and destroyed. Perez and Maria believe in a better world, but reality and destiny will keep the separated.