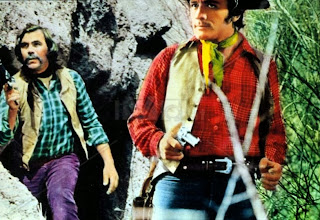 Mico Sarrabanda is the son of a farmer and works for Baron Don Cialormo Poki. In love with the baron’s daughter Tara he asks for her hand in marriage but is flatly rejected by Don Cialormo. Mico decides to take revenge against his rival Don Vincenzo Parroni and by burning his olive oil plantation. He then confronts the Baron and kills him. Jesus Poki, the son of the deceased, in turn kills Pasquale, the father of Mico. Mico has been protected by a young teacher named Grace but is no longer enough and he is forced to flee to America where it is received by the Calabrian Don Fifi. Proud and brave, in a short time Mico obtains honor and money by becoming a bounty hunter. Believing that he has obtained enough power to now realize his dream, he asks again for the hand of Tara Poki, to whom he has written numerous letters which had remained unanswered. Tara now joins him in America and pretends to be in love with him only to kill him during their wedding ceremony.