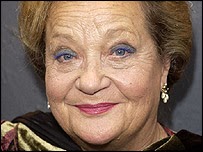 Sylvia May Laura Syms was born on January 6, 1934 in Wollwich, London, England. She was educated a convent schools before attendint The Royal Academy of Dramatic Art in London, on whose council she later served. Her daughter Beatie Edney [1962- ] is also an actress, and she is the aunt of musicians Nick [1954-1998] and Alex Webb [1961- ].

A repertory player by the time she was discovered for films by the British star Anna Neagle and her director/husband Herbert Wilcox, the lovely demure blonde started out auspiciously enough in the delinquent film “Teenage Bad Gir”l (1956) in which she played Neagle's troubled daughter. This was followed by a second Neagle/Wilcox collaboration with “No Time for Tears” (1957). Excelling whether cast in stark melodrama, spirited adventure or harmless comedy fluff, Syms' film list grew impressively in the late 1950s and early 1960s working alongside the likes of John Mills and Anthony Quayle in “Ice Cold in Alex” (1958), Curd Jürgens and Orson Welles in “Ferry to Hong Kong” (1959).

Ably portraying innocent love interests throughout the years, she graced a number of pictures without ever nabbing that one role that would truly put her over the top. She was nominated, however, three times for British Film Academy Awards--twice for best actress in “Woman in a Dressing Gown” (1957) and “No Trees in the Street” (1959) and once for supporting actress in “The Tamarind Seed” (1974) that starred Julie Andrews and Omar Sharif. The 1970s saw quite a bit of TV series work and she played British Prime Minister Margaret Thatcher at one point on both stage and TV. She grew plumper with middle age and found herself immersed in character roles, offering support in such films as “Absolute Beginners” (1986), “Shirley Valentine” (1989) and “Shining Through” (1992). American audiences have recently seen her as the dog-doting "Princess Charlotte" in the light teen comedy “What a Girl Wants” (2003) with Amanda Bynes and Colin Firth, and treading water as the Shelley Winters character in the TV-remake of The “Poseidon Adventure” (2005). Daughter Beatie Edney is a well-known actress in her own right.

Her only Euro-western was as Laura Galt in “The Desperados!” alongside Jack Palance, Vince Edwards and George Maharis. Her son Benjamin also appears in the picture as Pauly Gault.

Today we celebrate Sylvia Syms 80th birthday.
Posted by Tom B. at 6:11 AM