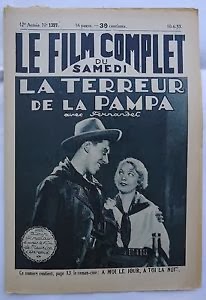 Having moved to Texas to make a quick fortune, Bill finds work as a handyman at a reputedly haunted ranch. With the help of an Indian and Nelly, the daughter of the household, Bill manages to resolve the mystery of the cursed ranch and free Jim Corbett, who has been held prisoner by the ranch's owner. Billy soon becomes a local hero and is elected sheriff..
Posted by Tom B. at 6:59 AM