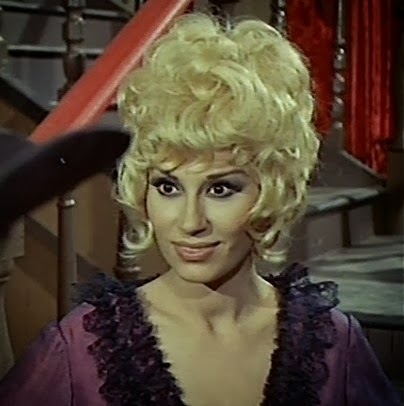 Actress and belly dancer Aiché Nanà  died at the Aurelia Hospital in Rome last night January 29th from complications of a disease from which she suffered for a long time. Turkish, although in biographies claim she was a native of Beirut, Lebanon would have turned 78 in February of this year. She was best known for the noise that was made​​, in 1958 during the  time of dolce vita, when she did an impromptu striptease in a restaurant in Trastevere, Rugantino, attended by several Italian and foreign celebrities of the time. Nanà appeared in four Euro-westerns: The Sheriff Won’t Shoot – 1965 (Desiree Vermont), Thompson 1880 – 1966 (Fanny), Gun Shy Piluk  - (Daisy Sugar Candy) and "A Wreath for the Bandits" (both 1968)
Posted by Tom B. at 7:06 AM