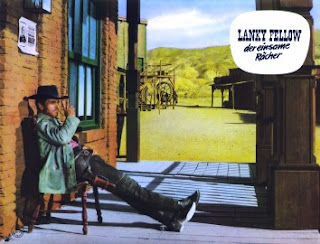 We continue with locations for “A Taste for Killing”. After the attempted holdup, the Collins mine shipment is successfully delivered to the Omaha City bank. While the others go home for the night to get some sleep, Fellows stays at the bank to guard the gold. He steps out for a smoke and notices a lone Mexican coming to visit his wife at the rooming house next door. Fellows recognizes him as Gus Kennebeck. Lanky Fellow moves the gold from the bank in the middle of the night and when Collins and Aarons discover it missing from the vault the next morning they confront Hank in front of the saloon.

The first picture above shows the building used for the rooming house of Gus Kennebeck’s wife and son. His wife is played by actress Rada Rassimov who played Maria in “The Good, the Bad and the Ugly”, the girlfriend of Arch Stanton, and is the same building Angel Eyes confronts her in to learn where Stanton is hiding. The second building is the hotel where Fellows is confronted by Aarons and Collins. It was used in “For a Few Dollars” more as the El Paso hotel Colonel Mortime stayed in before Indio’s bank robbery. Both buildings are located at Oasys (Mini Hollywood) theme park.