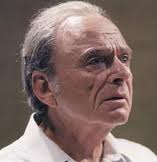 Harris Yulin was born in Los Angeles, California on November 11, 1937. He is the cousin of screenwriter Sloan Nibley [1908-1990] and actress Linda Stirling [1921-1997]. Yulin made his feature film debut in Aram Avakian's “End of the Road” (1970). Since then, the noted character actor has gone on to appear in over 115 films and TV appearances including one Euro-western as Wyatt Earp in “Doc” (1970) with Stacy Keach and Faye Dunaway. Yulin's television credits include starring roles in numerous movies-of-the-week and guest roles on such series as “Dynasty” (1976) “Murphy Brown” (1997) and “Buffy the Vampire Slayer” (1999-2002). He received Emmy nominations for his guest-starring roles on “Frasier” (1996) and “La Femme Nikita” (2011). Yulin has worked extensively in the theater as an actor and as a director both in Los Angeles, where he founded the LA Classic Theatre, and on Broadway, where he appeared in A Lesson from Aloes, Watch on the Rhine and The Visit. Today we celebrate Harris Yulins’ 75th birthday.