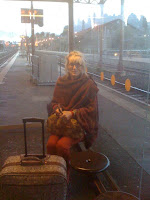 Vivienne Chandler was born on November 6, 1947 in Abingdon, Oxfordshire, England. She made her first appearance on TV in ITV Playhouse in 1970, then immediately began acting in minor parts in a number of major early 1970s films including “Lust for a Vampire”, Stanley Kubrick's “A Clockwork Orange” and her only Euro-western, Sergio Leone’s “Duck You Sucker” as James Coburn’s and David Warbeck’s love interest Coleen (all in 1971). She made several small appearances in the 1980s, including the music video for "The Smile Has Left Your Eyes" by the British supergroup ASIA in 1983, and appeared in “Babies” in 1997 but since then she has become a professional photographer working in the U.S. and many countries across Europe including France, Italy and the U.K.. She went to the University Paris Diderot between her film and television roles but all the time was interested in the process of image-making. As a photographer Vivienne reinvented her name for a while as Holly Bush and later Holly Bund as her career changed direction. Photographing mainly children, she has exhibited in London, Oxford and Kent and sold to private collectors in France, England and Japan. Early this century she was in ill health and moved to Paris where she has recovered and continues her work as a photographer. Today we celebrate Vivienne Chandler’s 65th birthday.