A PISTOL FOR 100 COFFINS 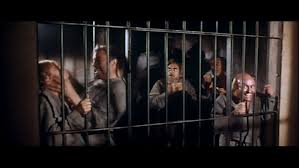 A soldier, Jim Slade, refuses, as a Jehovah's Witness, to use weapons and is therefore sentenced to two years of forced labor. Pardoned, removed from the Regiment, he goes to Tucson, his hometown, to be reunited with his family. Upon his arrival he discovers that his parents have been murdered. The culprits, he tells his friend Cassidy, are four outlaws: Jeff Logan, brothers Tony and Freddy, Butcher Corbett and the Texan. He quickly and successfully learns how to use a gun and begins a relentless hunt for the murderers. In a short time, he learns from Corbett that Slade has moved to Gulberstone, where he receives valuable assistance from Douglas, a lay preacher. Knowing that the bank is going to receive, from its headquarters, two hundred thousand dollars, Corbett lies in wait with his men at the edge of town to steal the money, but Jim, with a trick, manages to evade the blockade. Jim believes an attack is imminent and with a plan of defense, leads to the elimination of the gang. In the meantime a group of insane inmates housed in the town jail make their escape and terrorize the town. The only survivor of the outlaw gang is the Texan who tells Slade, before falling mortally wounded, that the real gang leader is the unexpected Douglas. Jim chases the fake preacher who is confronted by one of the insane inmates in the cemetery and in a gun duel Slade gets the better of him.