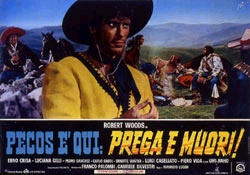 Pinto, Paco and Pepe, three travelling musicians, arrive in a Mexican village after the men of El Supremo, a fanatic who believes he is the heir of Montezuma, have sown death and destruction. The sole survivor of the massacre, an old man dying from torture, gives the three tramps a map with the directions to find the fabled treasure of Montezuma, hidden among the ruins of the temple of Teacoco in which the band of El Supremo has its headquarters. The three men ask for protection and cooperation from Pecos Martinez, a gunman who is willing to help them track down the treasure. Pecos is able to win the trust of El Supremo, who welcomes him among his men. With a clever plot, the gunslinger eliminates one after the other, all the bandits, and after a furious duel, gets the better of El Supremo. Tracking down the treasure, Pecos divides it equally with Paco, Pepe and Pinto.

I asked Robert Woods about his thoughts on “Pecos Cleans Up”, especially since he told me once he didn’t like doing sequels. “It was the only sequel I ever did, Tom. I signed to do “Pecos Cleans Up” against my better judgment, at the same time I signed to do “My Name Is Pecos”. When I finally got the script for the sequel, there weren't many similarities to the 'film-noir' characteristics of the dark and stormy original I had been attracted to and I must admit that at first, I wasn't enthralled with it, but I had agreed to do it in advance and dog-gone-it, I was obliged to do it. I actually enjoyed its change of pace as I got into it. I believe its saving grace was its border-line comedy, mixed with the violence. My friend, director Maurizio Lucidi, convinced me that it was cool and what the hell, he was actually fun to work with. Both films did extremely well all over the world.”