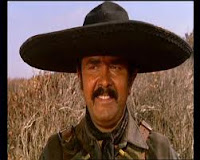 Lucio de Santis was born in Bologna, Italy on November 16, 1922. He was part of the Italian stock company of supporting actors and usually appeared in Euro-westerns playing Mexican bandits. Lucio appeared in 26 films and television appearances. He was sometimes billed as De Santis Lucio, Louis Santis or Bob Johnson and he’s probably best remember for his appearance in “Django” (1965) as the bandit whipping Loredana Nusciak at the beginning of the film. De Santis would go on to appear in 15 Euo-westerns including supporting roles in “The Relentless Four” (1965) “The Hills Run Red” (1966), “Vengeance” (1968) and his final film appearance in “And God Said to Cain” (1969). De Santis married actress Dina De Santis (Carlotta Provin) [1943- ] in 1967. Sometime in the 1970s the couple moved to Venezuela where Lucio passed away on August 23, 2006 in Caracas. Today we remember Lucio De Santis on what would have been his 90th birthday.