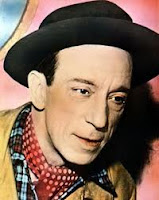 Raymond Bussières was born on November 3, 1907 in Ivry-la-Bataille, Eure, Haute-Normandie, France. Bussières began his career in cabarets and on stage. During the early 1940s, he began getting supporting roles in French films, later he began a long career playing character roles, usually played tragic blue-collar Parisians. In all he appeared in over 160 films between 1933 and 1982. Among which were two Euro-westerns: “The 4 Gunmen of the Holy Trinity” 1971 as Doctor Gordon Barrett and “The Return of Hallelujah” 1972 as Sam. Raymond wrote screenplays and produced two films before he passed away on April 29, 1982 in Paris, France at the age of 75. Today we remember Raymond Bussières on what would have been his 105th birthday.