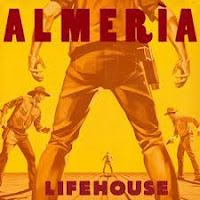 Currently promoting their new single “Between the Raindrops” featuring Natasha Bedingfield, Lifehouse recently visited 96.5 TIC/Hartford to reveal the story behind their upcoming album Almeria. Their sixth studio release, Almeria will be available December 12.

Thought it’s been a long time since their very first show, frontman Jason Wade recalled the early days of Lifehouse and his fears as a performer. He also confessed that “Somewhere in Between” is still one of his favorite songs to play.

Lifehouse also gave some insight into their new album Almeria, which they are currently promoting on their tour.

“The album is called Almeria, which is a city in Spain where they filmed all of the epic Spaghetti Westerns,” Wade explained. “For some reason unknown to us, this kind of undercurrent of that sound just made its way into half of the album. There’s like five tracks that have that Spaghetti Western undertone.”

He said the rest of the album stemmed from the band’s private jam sessions, which makes for an interesting balance of experimental and organic sound.

“There’s two themes going on at the same time,” he said.

While this Fall’s tour is mainly focused on promoting their new single “Between the Raindrops” Wade promises the band is planning a full concert tour in early 2013, most likely starting next March.