The fans of the Wesley Snipes and fans of the wild west and horror genres have been long-awaiting the Gallowwalker’s release. Shrouds of mystery and rumor surrounded the film following Wesley's legal complications and headlines of the last several years. However, with Wesley's release scheduled for the summer of 2013, the film remained "never having been seen" and its release strategy is still a tightly keep secret. The World Premiere FrightFest 2012 at the Vue West End, in London's Leicester Square occured Saturday October 27th 2012. 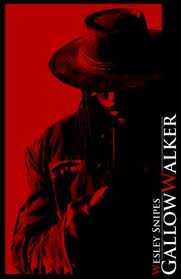 When a nun broke her covenant with God to save the life of Aman, her unborn son, he was cursed for life. As an adult, Aman has killed those who have crossed him. But his curse brings his victims back to life, and as the undead, they pursue him endlessly for revenge. Forever suffering this curse, Aman enlists Fabulos, a young gunman, to fight by his side against his undead victims.