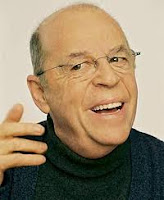 I was a radio host during WWII for British Forces Network and then became a DJ on NWDR in Germany.

I appeared in three Euro-westerns and ran a hotel in Mallorca, Spain in the 1970s.
Guess who I am.