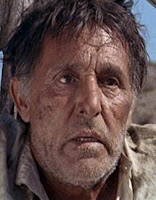 Rufino Inglés Garcia was born in Madrid, Spain on November 10, 1902. He is the father of actor Javier Inglés. Rufino appeared in over 150 films as a character actor using such pseudonyms as Howard Irving, Ingles Rufino, Rufino Garcia. His first film appearance was in “La virgen de cristal” (1926) and his last appearance was as a regular in the 1982 TV series “Los gozos y las sombras”. Inglés appeared in 26 Euro-westerns from “Dirty Gold” (1941) to “The Prey of Vultures” (1972). Never a leading actor he was still a highly regarded character actor who filled many roles in the history of Spanish Cinema and the Spaghetti Western genre. Usually playing saloon patrons, townsmen and Mexicans he was a regular face whenever westerns were filmed in Spain. Inglés died on November 2, 1981 in Madrid eight days short of turning 79. Today we remember Rufino Inglés on what would have been his 110th birthday.