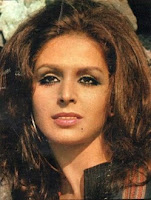 Aliza Adar is an Israeli born in Casablanca, Morocco on September 1, 1948. She lived in Tel Aviv and appeared in theater in the kibbutzim and then moved to Rome and landed small roles in Italian films. The industrialist Raimondo Castelli, who had an affair before her with Sylvia Koscina, tried to make her a star. She began a career as a model and appeared on several magazine covers. In 1970 she made her film debut in the film “Un colpo al cuore”, alongside Elena Zareschi, later in 1971 she starred in the war film “The Long Shadow of the Wolf”, directed by Gianni Manera and was the female protagonist in the comedy film “Lo I Want Male” directed by Ugo Saitta. In all she appeared in only five films from 1970-1974. Aliza appeared in only one Euro-western as Teresa in 1971’s “Tara Poki”.