It was the scene of an infamous murder almost a century ago that inspired a Spanish literary masterpiece, but ever since the former monastery of Cortijo del Fraile has lain crumbling and shrouded in silence.

A pile of stones marks the spot where Francisco Montes was shot three times in the head with his own revolver while trying to elope with his lover in 1928.

The crime, which took place on the track of the isolated estate in Cabo de Gata in Almeria, Andalusia, inspired the play Blood Wedding by Federico Garcia Lorca.

Locals in the southeastern region were shamed by the notoriety brought by the play and maintained a wall of silence for decades, fearful that discussing the murder would open old wounds.

But now the taboo has lifted, local authorities have brought the decaying farmhouse back for 2 million and announced renovations that would transform it into a museum.

“Due to Lorca’s play the place has passed into the Spanish collective imagination and become a historic icon,” Javier Garcia, the head of Almeria’s provincial government, said. “The first step will be a consolidation of the building because it is very deteriorated. The priority is to save the chapel because it is the most emblematic part.”

The chapel is where Francisca Canadas, who lived on the estate with her brothers, was due to marry Casimoro Perez, a farm laborer, in an arranged marriage on July 22, 1928. On the morning of the wedding, Montes, her cousin, arrived at the Frailes and whisked the bride-to-be away on his horse.

The couple were ambushed by a group of Perez’s relatives, however, the jilted groom’s brother, Jose, is thought to have shot Montes with his own revolver while Canadas is said to have been attacked by her sister, Carmen, who tried to strangle her. She was left for dead but survived.

Jose Perez spent three years in prison and Carmen Canadas was condemned for trying to strangle her sister but spent only a short time in jail. Francisca Canadas never married and lived as a recluse. She died in 1986. Casimoro Perez eventually married and died in 1990.

Lorca wrote1 Blood Wedding after reading about the murder in a newspaper. Completed in 1932, it is seen as a tragedy symbolizing the dark, violent nature of Spanish rural life, and which literary critics say foretold the barbarity of the 1936-39 Spanish Civil War.

At the start of the conflict, Nationalist forces murdered Lorca and dumped his body in a mass grave by its side. In spite of several excavations his remains have never been found.

The former monastery, built in the 18th century by Dominican friar, was seized by the state in the mass confiscation of ecclesiastical property in 1836 and passed into private hands. Its farmhouse and chapel have been looted.

Over the years the estate was used as a set for several films, thanks to its “Wild West” landscape, including The Good, the Bad and the Ugly, the 1966 Spaghetti western starring Clint Eastwood.

Occasionally elderly passers-by stop to make the sign of the cross and add a pebble to the cairn that marks the spot of the Montes’s murder.

What happened there in 1928 has never been clear. In an interview nearly two decades ago Joaquin Perez, the son of the supposed murderer, said: “The only people who knew what happened have taken the secret with them to the grave. I know a few things but I am not going to tell them.” 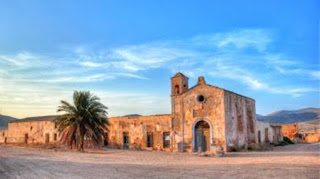