Voices of the Spaghetti Western ~ “Billy the Kid” 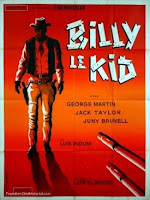 [Thanks to Mike Ferguson for the French voice actors.]

José Martínez Blanco was born in 1931 in Spain. He was an actor, and very familiar voice dubber for many years and was best known to the Spanish speaking world as the voice of Ernie (Epi) on TV’s ‘Sesame Street’ and as Kermit the Frog on ‘The Muppet Show’  DiedOctober 2, 1990. Blanco was also the Spanish voice of Dick Van Patten on the TV sitcom series ‘Eight is Enough’. Blanco died in Madrid, Spain on October 2, 1990, at the age of 59.