Winnetou was Born in Romania

Winnetou was born in Romania: the story of actor Mircea Breazu, who played the role of the Apache chieftain for 25 years 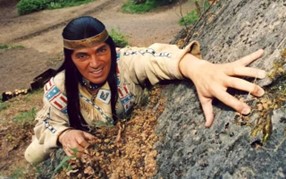 Mircea Breazu, or Benjamin Armbruster as he is known in Germany, is a Romanian actor who played the role of the famous chief Winnetou for 25 years.

If you grew up before the 1990s, you may remember the “craze” surrounding this character created by Kark May. Well, while in Romania the hysteria has died down a bit since the Revolution, there are still dedicated festivals in Germany to this day, as you’ll learn below. 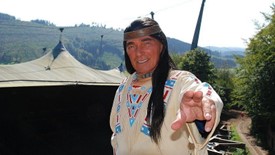 Mircea Breazu was born in 1946 in Sebeș,but spent his entire adolescence in Timișoara.

Although he is best known for the roles he played throughout his career, few people know that the actor was, in the first instance, passionate about sports. He took up swimming, motor racing and cycling, which helped him later in his career, making the transition to stunt work much easier.

“I never dreamed of being an actor, although my mother was an actress. I hoped to become a very famous athlete. But my mother was very insistent that I should apply to IATC. She said, ‘My dear, you grew up with me in the theaters. You really don’t want to follow this path?”. She finally convinced me.

With only a month and a half of preparation, I applied for admission and got in seventh, even though there were 1,200 applicants. That’s when I realized that acting was in my blood”, Mircea Breazu said in an interview with adevarul.ro 7 years ago.

In Romania, he played in Dacii, by Sergiu Nicolaescu, since his first year at university, but was later noticed by Elisabeta Bostan, who offered him the role of Prince Charming in the film Youth without Age.

Among his most important films it is worth mentioning Michael the Brave, Ulzana, The Prophet, Gold and the Ardeleni or The Yellow Jackets or The Battle for Rome, where he proved his undeniable stuntman qualities. 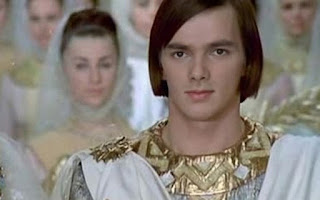 “That’s right, these are the milestones of my career. For “Youth Without Old Age” I took part in an extensive casting, at the end of which it was just me and Andi Herescu, and Mrs. Bostan chose me. The next day, when I met Andi, she tried to make a joke, but it didn’t really work: “What can you do, I have a 20th century face, not a peasant face”. Alluding to the fact that Prince Charming was a shepherd at the beginning of the story.

Otherwise, we got along very well. I have another funny story from that time. We were filming at the Bicaz Gorge. When I was prospecting, the place wasn’t paved. But six months later we found ourselves with the road done. So, we had to paint the asphalt, so that it wouldn’t be known”, Mircea Breazu also told the source.

He even played on the stage of the Nottara Theatre until he managed to leave the country.

Mircea Breazu was Winnetou for 25 years

As I said before, Winnetou stories don’t have so much impact with us nowadays. At the same time, Germany dedicates entire festivals to Karl May’s work, two of the most important being the one in Bad Segeberg, a small town near Hamburg, founded in 1952, and the one in Elspe, near Dortmund, founded in 1958.

Winnetou was played for 25 consecutive seasons by Mircea Breazu. Known in Germany as Benjamin Armbruster, he left Romania in 1979 and metamorphosed into Winnetou over the years.

He played at the Bielefeld Theatre for 30 years, from where he also retired.

He later became co-director of Elspe, and last played Winnetou at the festival in 2012. The Germans have nothing but praise for the artist, with many German publications praising him for his excellent portrayal of the famous Apache chief.

It should be noted that the role of Winnetou was played in the film series by French actor Pierre Brice.