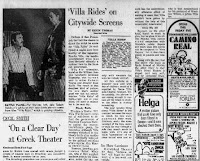 Perhaps Sam Peckinpah had had the chance to direct the script he wrote for “Villa Rides” (in multiples) it might have been worthy of the legendary Pancho Villa, the bandit revolutionary who has been declared officially a national hero by the Mexican government.

But his screenplay, based on the William Douglas Lansford’s novelized biography, was turned over to writer Robert Towne and director Buzz Kulik. The result is that the deadliest kind of picture, the one that’s neither good nor bad but merely routine “Villa Rides” all right – right out of your mind. It’s hard to remember it the next day.

The time is Mexico 1912. Villa (Yul Brynner) comes out of retirement to defend the government of President Francisco Madera against the counter revolutionary group, the Colorados. Although Villa emerges victorious in one bloody battle after another he is eventually betrayed by the political ambitions of his superior, Gen. Huerta (Herbert Lom).

However, American gunrunner Robert Mitchum, who at first supplied machine guns to the Colorados, saves the day not only with weapons but with his rickety aircraft.

All this unfolds at a leisurely pace and with lots of violence, much of it supplied by fierce Villa aide Charles Bronson. Unfortunately, the picture is not strong enough to sustain all the blood it sheds, so the effect is frankly nauseating.

The most notable thing about “Villa Rides” is the contrast between the ways in which its two stars approach their work. Mitchum, easily the more talented of the two, seems to walk his way through a role that wasn’t much to begin with (It’s one of those “composites” of various actual men as such has the unintentionally offensive effect of making it seem that Villa couldn’t have gotten by without the help of this resourceful Americano).

Brynner, on the other hand, hasn’t as much to give, but he gives it his all. His Pancho Villa cannot stand comparison with Brando’s subtle Zapata any more than this movie can be compared to “Viva Zapata,” but it does have plenty of passion and vitality.

Along with the fact that this movie was made in Spain instead of Mexico, the other irony is that Villa’s friend Madero is played (and very well, too) by Alexander Knox, who is best remembered for his portrayal of Woodrow Wilson, a prime Villa foe.