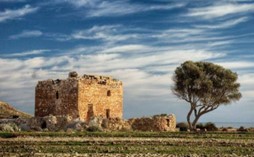 The recently constituted Coordinator of the Associations of the Peoples of Cabo de Gata is formed by the neighborhood associations of the Nijareña towns of Agua Amarga, Las Hortichuelas, La Isleta del Moro, Las Presillas Bajas, Las Negras, Rodalquilar and San José, together with the association "Amigos del Parque". And it was born with the intention of improving the golden crown of the natural park, a highly protected space with an extraordinary natural and cultural heritage.

The Coordinator was constituted last October and has already prepared an extensive 'Joint Declaration' that makes a diagnosis of the main problems that afflict the peoples of Cabo de Gata and the Natural Park itself and proposes solutions to them through the elaboration and development of an Action Plan for the Improvement of the Peoples of Cabo de Gata-Nijar, to be developed throughout the next municipal mandate. This Declaration has already been formally presented to the City Council of Nijar (PSOE) recently.

Based on the content of the Declaration, the Coordinator of Associations has committed to work together to achieve their demands and, their first public action will be the realization of a human chain, which they have convened at 11 am next Saturday, January 14, in the Torre de los Alumbres de Rodalquilar (Camino del Playazo).

"This information will mean the awakening of the citizen mobilization of the towns of Cabo de Gata, plunged into oblivion and abandonment by the City Council of Nijar for many years," warn from the collective.

Also known as Castillo de la Ermita or Castillo de Rodalquilar, the Torre de los Alumbres was built in 1509, by order of Francisco de Vargas, for the defense of the Alum mine of Rodalquilar, against the numerous attacks of Barbary pirates. Along with it was built another tower made of mud, which disappeared in the eighteenth century. Due to abandonment and lack of conservation, it remains in an almost ruinous state.