This series of daily posts will cover little known actors or people that have appeared in more recent films and TV series. Various degrees of information that I was able to find will be gven and anything that you can add would be appreciated. 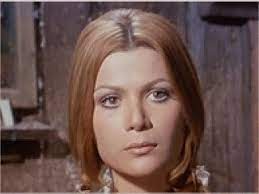 Italian actress Patrizio Adiutori’s short career consisted of appearances in 13 films from 1969 in “Madame Bovary” as Brigitte until her last appearance as Carlotta in 1973’s “Tales of Canterbury”. Her only Euro-western appearance was a Senta/Sandy in “Shoot the Living and Pray for the Dead” in 1970. According to research done by Spanish author Carlos Aguilar he discovered Patrizio was born in 1950 and sadly passed away in 2006. He could find no one who could tell him why she dropped out of film making and what happened to her afterward.