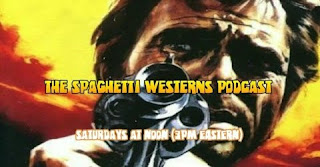 I invite you to join me today at noon PST as I’ll be talking about and covering the following topics. In out continuing ‘History of the Spaghetti Western’ I’ll be talking about Franco & Ciccio’s first western “Two Mafiamen in the Far West”. In our “Whatever became of?... Then I’ll cover the life and career of Peter Martell. In our “Who are those Guy? We have Remo Capitani and his plethora of westerns. The film of the week is Lee Van Cleef’s often overlooked “Beyond the Law”. I’ll have a CD of the week a few posters and we’ll get caught up on some major passings since our last broadcast in Season 4 and wrap it up with ‘The Weekly News. So set your clock for 12 noon PST and we’ll see you on Facebook and You Tube.