Spaghetti Western Voices – “Behind the Mask of Zorro”

Today we’ll cover “Behind the Mask of Zorro” 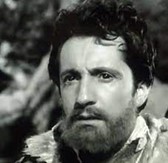 José María Seoane Buján was born in Vigo, Galicia, Spain on September 13, 1913. He was a member of the Martín Códax Group of Vigo, in which he developed an active acting work and became a stage director. He participated with stage director Luis Escobar in the play “El hospital de los locos” in the 1940s. In the following years he became the leading actor of the Teatros Español and María Guerrero de Madrid, in which he had the opportunity to interpret great classics such as “Cyrano de Bergerac”, “La vida es sueño”, “Othello” and, on several occasions, he headed the cast of “Don Juan Tenorio”, of José Zorrilla with his wife Rosita Yarza.

He debuted on the big screen with the film “Porque te vi llorar” (1941) by Juan de Orduña, which would be followed by more than 40 titles until his last appearance in “La guerrilla” (1972), by Rafael Gil.

Seoane was married to actress Rosita Yarza [1922-1996] and the couple had two sons Alfonso and José María. He died of kidney failure July 7, 1988, in Madrid.