About the only reason for staying through “Villa Rides” is to see whether you are bored to death before all the characters are killed off.

The Paramount release now at six Eastbay theaters has Yul Brynner as a sullen Pancho Villa, Robert Mitchum as a pilot who’s working with him, and features the bloody bodies of hundreds of Spaniards (the picture, set in Mexico, was filmed in Spain).

It claims to be a cheaper in Mexican history when Villa came out of retirement to help get rid of the “Colorados,” counter-revolutionaries who threatened President Madero.

The movie’s senseless and for no serious purpose (depicting the path of revolutions, for instance). It is all much more difficult to sit through than it might have been a few weeks ago.

There are rapes and plunders, hanging, bodies swinging from ropes in the background, the shooting of prisoners one by one, the bombing of a troop train. In one scene, Brynner casually drops a bomb down a well where a fleeing army officer is hiding.

Brynner’s Villa is al brutality, with little hint of the revolutionary, patriot or popular hero. “Pancho Villa is a bandit, a bigamist and a barbarian,” Mitchum says, as if writing the movie ads.

In one confrontation, Mitchum describes himself as “just like you – first a bandit, then when I get big enough they’ll call me a hero.”

Don’t be surprised if Mexico retaliates by taking back California, or at least confiscating the Pasramount studios. No wonder they made the picture in Spain.

Mitchum walks sleepy-eyed though his part as a mercenary, wearing a clean white shirt throughout, shaking his head a couple of times at the savage “Mexican.”

One interesting bit of casting is Alexander Knox as the troubled Madero. Knox played the equally troubled President Woodrow Wilson in a 1944 film which was a box-office failure when action packed war movies were pulling in crowds. 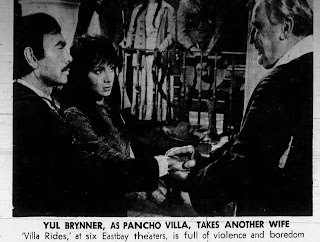