Who Are Those Guys? ~ Andrea Checchi 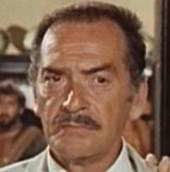 Andrea Cheechi was born in Florence, Tuscany, Italy on October 21, 1916. He moved when he was very young to Rome to attend the experimental cinematography center. He made his film debut in 1934, at eighteen, under the direction of Alessandro Blasetti in “1860 I Mille di Garibaldi”. Less than a year later he played a secondary role in “Old Guard”, also directed by Blasetti.

Many films followed with supporting roles until he came to everyone's attention in “L'assedio dell'Alcazar” (1940) and above all with “Ore 9: lezione di chimica” directed by Mario Mattoli in (1941), a film in which also appeared Alida Valli, Irasema Dilian and Bianca Della Corte. “Avanti c'è posto...” directed by Mario Bonnard solidified his popularity. Until at least the mid-1940s, he was among the most sought-after young Italian actors, for dramatic roles.

Considered a modern actor, he embodied for years the figure of the loser, resigned and insecure, acting as a counterbalance to the sparkling roles played by Rossano Brazzi, Roberto Villa, Massimo Serato and Leonardo Cortese, or of the absolute star of that era, Amedeo Nazzari. His characters, dressed often in crumpled clothes and with a tie systematically skewed, allowed him to contend with Massimo Girotti, even if he seemed less captivated than that actor, the role of the tormented and fragile protagonist. The natural heir to Fosco Giachetti, he was unlike the Tuscan star, more malleable, releasing less hardness and inflexibility and loading his interpreted characters with vulnerability to which the cinema of the thirties was not accustomed.

The Italian cinema gradually learned to approach neorealism. Equipped with a raspy but sensual voice that contributed greatly to strengthen his image of a man with personality at times weak but animated by good feelings, he was certainly considered to be a movie star of the forties so much so to be immortalized, like the big stars of the 'era, by the famous photographer Luxardo - of the homonymous gallery in Via del Tritone in Rome - in a very original pose: with a cigarette between his lips and his face partly covered by smoke.

But things changed in the early post-war period. Although winning the first Silver Ribbon as the best actor in the history of the film “Due lettere anonime” in 1946, the opportunities to have leading roles were quickly reduced and his face, very marked already at a young age, lent itself above all to portray losers, losers, to whom, however, dignity never failed.

His sober and measured performance was increasingly directed to parts of a supporting actor who embellished great films such as: “Caccia tragica” (1947) directed by De Santis, “Achtung! Banditi!” (1950) by Lizzani, “La signora senza camelie” (1953) by Antonioni (for which he won the Golden Grolla for Best Actor) and “L'assassino” (1961) by Elio Petri. In his new artistic role he repeated his earlier success of 1946 by winning, in 1958, the Silver Ribbon for best supporting actor for the film “Parola di ladro”.

In the second part of his film career he acted in supporting roles that allowed him to work with the greatest Italian directors of the time and to carve out his own space, albeit less than in the past, during the great time that Italian cinema lived with neorealism. In his career it should also be emphasized the peculiarity of having interpreted various military figures and having portrayed fascists several times, and then, after the Second World War, he turned to the characters of partisans and anti-fascists.

In the 1960s his television activity was intense, especially under the direction of Anton Giulio Majano. In 1962 he was Father McMillan in the screenplay “Una tragedia americana”, he was Captain Ivan Mironov in “La figlia del capitano” (1965) and in the same year he played Valkov in “Resurrezione”. In 1967 he was John Sedley in “La fiera della vanità”. Finally he played Robert Fenwick in “E le stelle stanno a guardare” (from Cronin, 1971), the commissioner Bonsanti in the very good “Il segno del commando”, where he found the tragic Girotti di Caccia. The following year he was Betteredge in “La Pietra di Luna”.

Checchi married the Hungarian Erika Schwarze with whom he had a son - Enrico Roberto Checchi a painter and assistant director who died at 57.

Andrea suffered from an autoimmune disease - knotty polyarteritis- and after hospitalization at a specialized clinic in Geneva he returned to Rome to go to the Salvator Mundi hospital. Andrea Cheechi died of periarthritis in Rome, Italy on March 29, 1974. He was only 57 years-old.