50th Anniversary of “Once Upon a Time in the West” 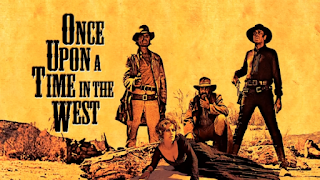 The 50th Anniversary of the premier of “Once Upon a Time in the West” is this Friday December 21st. All this week we’ll be running posts relating to what many critics say is the greatest Euro-western of all-time.

“You could say that Once Upon a Time in the West was the movie that made me consider film-making... but more, how to make an impact as a film-maker...” Quentin Tarantino 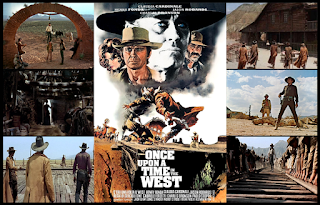 Before I get into this, I want to make mention “A FILM TO REMEMBER” will be a series about films that have reached a milestone anniversary since their origin. The articles will contain the film’s plot outline, director, cast, a compilation of trivialities, various photos, movie trailer, critical reception and more. So, let’s start:

We are here to mark the celebration of the 50th Anniversary of Sergio Leone’s “Once Upon a Time in the West”. Let’s take an inside look at the film:

PLOT OUTLINE:
A mysterious stranger with a harmonica joins forces with a notorious desperado to protect a beautiful widow from a ruthless assassin working for the railroad.

TAGLINE:
There were three men in her life. One to take her…one to love her…and one to kill her.
Still image of Claudia Cardinale in “Once Upon a Time in the West”.

The film is known for being an exaggerated, fairy-tale variation on the Western, creating a horseback epic of bad guys with a heart of gold and an iron engine that reshapes the landscape as its tracks are laid through the wilderness in this hyperbolic of a wild west opera. Director Sergio Leone makes what many call his magnum opus and pulls together most of the themes from his Man with No Name trilogy films, and also contributes to one of the most famous credited sequences in cinematic history, featured with Ennio Morricone’s striking musical score and stabled by an unrivaled cast and swaggering performances from Henry Fonda, Claudia Cardinale, Jason Robards and Charles Bronson in a stylish, violent, poetic elegy of a spaghetti western landmark. The film is based from a story from Dario Argento, Bernardo Bertolucci and Sergio Leone, and then written by Sergio Donati and Sergio Leone, it got panegyric critical reception but did get a little criticism, however, in subsequent years, the film has developed a greater critical standing and become known as one of the genre’s all-time masterworks.

Here’s what some of the critical receptions have been for the film over the years:

Douglas Pratt from Hollywood Reporter says: “Sergio Leone’s ‘Once Upon a Time in the West’ is one of the greatest face movies ever made.”

Vincent Canby from New York Times says: “‘Once Upon the Time in the West’ is almost always interesting, wobbling, as it does, between being an epic lampoon and a serious homage to the men who created the dreams of Leone’s childhood.”

Roger Ebert from Chicago Sun-Times says: “The movie stretches on for nearly three hours, with intermission, and provides two false alarms before it finally ends.”

Chuck Stephens from Village Voice says: “If only the first 10 minutes of Sergio Leone’s ‘Once Upon a Time in the West’ still existed, this most hyperbolic of oat operas would still be acknowledged as one of the genre’s greatest exhumations.”

Stanley Kauffmann from The New Republic says: “There is something touching and maniacal about the two-and-three-quarter-hour result. Leone’s adoration of all the standard props and décor — the horses, the saloons, the guns, the clenched jaws, the histrionic taciturnities — has a childlike wonder about it.”

As you can tell by the critical reactions, the film received much praiseworthy adoration though a few critics complained of its length and convoluted plotting, howbeit, Leone loaded up in this revisionist western with an authentic yet hyper stylized, complete with the coolest cowboy fashion (gunslingers in long coats has never been bettered), main street shootouts, raw, memorable characters and plenty of unforgettable moments that are sturdied with an elect cast and performance by Fonda, Cardinale, Robards and Bronson in this operatic oater, kick-ass, shoot ‘em up, styled ode of a mystic western classic. But I’ll let you decide…

So, to get a better look at the film, here’s a link to the movie trailer of Sergio Leone’s “Once Upon a Time in the West”:

Here I have provided 12 interesting and intriguing trivia facts (I wanted to keep it limited) about “Once Upon a Time in the West”:

*After making his American Civil War epic “The Good, the Bad and the Ugly” (1966), director Sergio Leone had intended to retire from making westerns, believing he had said all he wanted to say. Leone had come across the novel “The Hoods” by the pseudonymous “Harry Grey,” an autobiographical novel based on the author’s own experiences as a Jewish hood during Prohibition, and planned to adapt it into a film but this would eventually, 17 years later, become his final film, “Once Upon a Time in America” (1984). Leone though was offered only westerns by the Hollywood studios. United Artists (who had produced the Dollars Trilogy) offered him the opportunity to make a film starring Charlton Heston, Kirk Douglas and Rock Hudson, but Leone refused. However, when Paramount offered Leone a generous budget along with access to Henry Fonda — his favorite actor, and one whom he had wanted to work with for virtually all of his career — Leone accepted the offer.

*Sergio Leone commissioned Bernardo Bertolucci and Dario Argento — both of whom were film critics before becoming directors — to help him develop the film in late 1966. The men spent much of the following year watching and discussing numerous classic Westerns such as “High Noon” (1952), “The Iron Horse” (1924), “The Comancheros” (1961), and “The Searchers” (1956) at Leone’s house, and constructed a story made up almost entirely of “references” to American westerns.

*Ever since “The Good, the Bad and the Ugly” (1966), which originally ran for three hours, Sergio Leone’s films were usually cut (often quite dramatically) for box office release. Leone was very conscious of the film’s length during filming and later commissioned Sergio Donati, who had worked on several of Leone’s other films, to help him refine the screenplay, largely to curb the length of the film towards the end of production. Many of the film’s most memorable lines of dialogue came from Donati, or from the film’s English dialogue adapter, expatriate American actor Mickey Knox.

*For the film, Sergio Leone changed his approach over his earlier westerns. Whereas the “Dollars” films were quirky and up-tempo, a celebratory yet tongue-in-cheek parody of the icons of the Wild West This film is much slower in pace and sombre in theme. Leone’s distinctive style, which is very different from, but very much influenced by, Akira Kurosawa’s “Sanshiro Sugata” (1943), is still present but has been modified for the beginning of Leone’s second trilogy, the so-called Once Upon a Time Trilogy. The characters in this film are also beginning to change markedly over their predecessors in the Dollars Trilogy. They are not quite as defined and, unusual for Leone’s characters up to this point, they begin to change (or at least attempt to) over the course of the story. This signals the start of the second phase of Leone’s style, which would be further developed in “Duck, You Sucker!” (1971) and Once Upon a Time in America (1984).

*Sergio Leone liked to tell the story of cinema in Paris where the film ran uninterrupted for 2 years. When Leone visited this theatre, he was surrounded by fans who wanted his autograph, as well as the projectionist, who was less than enthusiastic. Leone claimed the projectionist told him “I kill you! The same movie over and over again for two years! And it’s so SLOW!”

*Henry Fonda did not accept Sergio Leone’s first offer to play the character of Frank, so Leone flew to New York to convince him, telling him: “Picture this: the camera shows a gunman from the waist down pulling his gun and shooting a running child. The camera tilts up to the gunman’s face and…it’s Henry Fonda.” After meeting with Leone, Fonda called his friend Eli Wallach, who had co-starred in “The Good, the Bad and the Ugly” (1966). Wallach advised Fonda to do the film, telling him “You will have the time of your life.”

*When he accepted the role, Henry Fonda came to the set with brown contacts and facial hair. Fonda felt having dark eyes and facial hair would blend well with his character’s evil and also help the audience to accept this “new” Fonda as the bad guy, but Sergio Leone immediately told him to remove the contacts and facial hair. Leone felt that Fonda’s blue eyes best reflected the cold, icy nature of the killer. It was one of the first times in a western film where the villain would be played by the lead actor.

*Sergio Leone originally offered the role of Harmonica to Clint Eastwood; but turned it down, Leone then casted Charles Bronson who had originally been offered and turned down the part of the Man with No Name in “A Fistful of Dollars”. James Coburn was also approached for Harmonica, but demanded too much money.

*Robert Ryan was offered the role of the Sheriff played by Keenan Wynn. Ryan initially accepted, but backed out after being given a larger role in Sam Peckinpah’s “The Wild Bunch” (1969).

*Al Mulock, who played the role of Knuckles in the film, as well as had a part in Sergio Leone’s “The Good, the Bad and the Ugly” (1966) committed suicide during shooting of this film by leaping from his Guadix hotel room in full costume. Frank Wolff, who plays the character of Brett McBain, also committed suicide in a Rome hotel in 1971.

*The film features leitmotifs that relate to each of the main characters (each with their own theme music) as well as to the spirit of the American west. Especially compelling is the wordless vocals by Italian singer Edda Dell’Orso during the theme music for the Claudia Cardinale’s character. It was Sergio Leone’s desire to have the music available and played during filming. Leone had Ennio Morricone compose the score before shooting started and would play the music in the background for the actors on set.

*Sergio Leone’s intent was to take the stock conventions of the American westerns of John Ford, Howard Hawks and others, and rework them in an ironic fashion, essentially reversing their intended meaning in their original sources to create a darker connotation. The most obvious example of this, is the casting of veteran film good guy, Henry Fonda as the villainous Frank, but there are also many others, more subtle reversals throughout the film. According to film critic and historian Christopher Frayling, the film quotes from as many as 30 classic American westerns. The major films referenced from include: “The Comancheros” (1961), “Johnny Guitar” (1954), “The Iron Horse” (1924), “Shane” (1953), “The Searchers” (1956), “Winchester ‘73” (1950), “The Man Who Shot Liberty Valance” (1962), “The Last Sunset” (1961) and “Duel in the Sun” (1946)

To conclude, Sergio Leone’s “Once Upon a Time in the West” explores legends and entombs myths into a film that’s filled with deep-focus panoramas, looming widescreen closeups, Ennio Morricone’s ritual musical composition and illustrious sound design are as distinctive as the ballistic signature of a bullet. Sergio Leone’s insistence on stylization trumped the need for substance in this sprawling saga of vengeance and progress of a mythic tale in folkloric proportions, with bigger-than-life, mythological characters filled with moralities and passions that are anchored by a virtuoso cast and bravado performances by Henry Fonda, Claudia Cardinale, Jason Robards and Charles Bronson in this whole shooting match of heroes, villains and desperados of a lush, sensuous, gunslinging, horse and buggies, elegiac operatic yet, intimate scaled spaghetti western masterpiece.
Posted by Tom B. at 5:51 AM