50th Anniversary of “The Man Who Cried for Revenge”

Today marks the 50th Anniversary of the Rome premier of  Il suo nome gridava vendetta (The Man Who Cried for Revenge) directed by Mario Caiano under the alias William Hawkins and starring Anthony Steffen and William Berger. 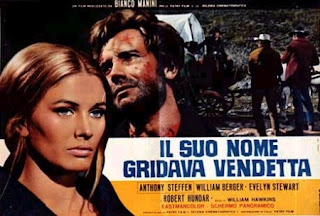