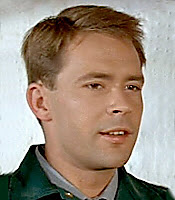 Danish theater, film, radio, TV actor Henning Palner died in Mindebog on December 20, 2018. He was 86. Palner participated in film successes such as "Komtessen" in 1961, "Vil du se min smukke navle" in 1978 and "Solkongen" in 2005. Also the television series "Huset på Christianshavn", "Gøngehøvdingen" and "Bryggeren". Most of his acting career revolved around the theater which began in 1956 when he was admitted to Royal Danish Theater School. Palner's distinct deep voice was by many in audiobooks. Where he has spoken in over 200 titles, as well as having toured the country with talks about his life on the boards. Palner was at one time married to actresses Yvonne Ingdal and Beatrice Palner. He appeared as Oscar Wilde in the 1965 television western ‘Wilde west’.
Posted by Tom B. at 7:53 AM