Located in the countryside of Nijr, on a high road between Ruescas and La Boca de los Frailes, it holds an interesting part in the film “Run, Man, Run” (1969): and one of the stages of the long escape from Cuchillo (Thomas Milian), which, while he stops for water, is captured by the two French bounty killers and tied to the blades of the windmill to make him reveal what they are looking for. The blades of the old mill have long ago disappeared, but the structure is fairly well preserved; there are also parts of the tank and the building facing the mill itself. The location was also used for a missing scene from “The Good, the Bad and the Ugly” where Tuco preaches to the townspeople. 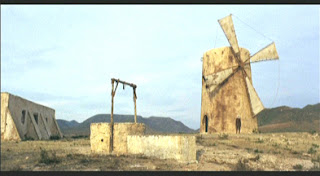